Martin H.F. Gonser, MS, MLS is a Media Specialist in the NYC Metropolitan Area, offering an array of services and expertise in information research, library science, performing arts, and the integration of traditional resource material and innovative technology. With a wealth of knowledge and experience in the field of educational technology, Mr. Gonser serves as a digital media and resource specialist who focuses on digital information management. He is adept at sharing his knowledge with students, teachers and administrators, and frequently delivers professional presentations and workshops. Mr. Gonser began serving on the board of directors for the New York State Association for Computers and Technologies in Education on July 1, 2011. He has an abiding interest in music, and has served as an accompanist for the school chorus, and as a music director and organist at local churches.

For more than 16 years, Mr. Gonser has built on an ever-emergent skill set, which has enabled him to help others to make considerable advancements in their chosen industries. He has garnered a reputation of distinction for his knowledge and expertise; his accolades include induction into Who’s Who Among America’s Teachers in 2006, Professional of the Year in Educational Technology honors as granted by Cambridge Who’s Who in 2011, induction into Marquis Who’s Who in 2011, and honors as an Industry Expert in Educational Technology as granted by Cambridge Who’s Who for 2011 and 2012. Mr. Gonser has fulfilled a number of roles over the course of a career that has spanned nearly two decades, serving as an accompanist for the Intermediate School 230 Chorus, on-call and off-site services organist for local congregations, and as a media librarian and assistant director at Five Towns College, among many other positions.

Mr. Gonser is proud to be able to make valuable contributions to his field by remaining ahead of the curve, and abreast of trends and developments in technology. Ever passionate about his work, Mr. Gonser remains abreast of trends and developments as a member of such organizations as ASD, ISTE, and the Walden University cyber-chapter of Phi Delta Kappa International, an organization for which he serves as director of technology. He also belongs to the American Society for Information Science and Technology, ACM, Inc., the American Library Association, the New York Library Association, and the New York State Association for Computers and Technologies in Education. 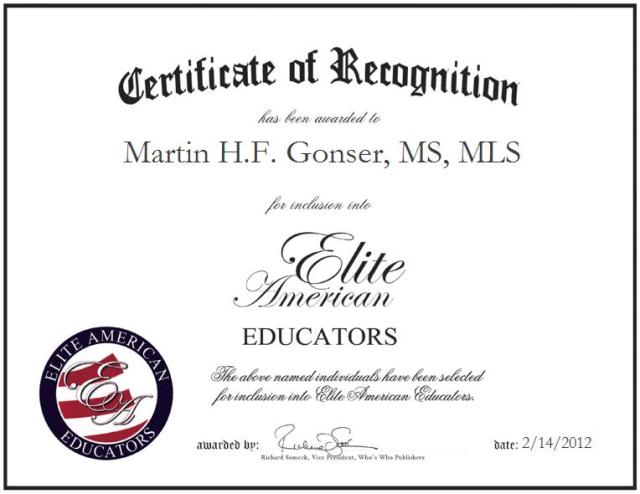