Prior to his retirement from his position as professor of chemistry from McNeese State University, Mr. Rogers specialized in teaching science to students who required additional assistance in the course. Over the course of a career that spanned more than four decades, he taught science to students who ranged from K-12, and he strived for excellence in helping them to achieve their academic goals. He became involved in his profession because he attended college with his wife, whom started teaching while he attended graduate school. She needed his help teaching a science class; which piqued his interest in the field.

Mr. Rogers has garnered a reputation of distinction for his work as an educator throughout the years, and he continues to break new ground as a mentor. He served as a project director and staff member of the NSF Project from 1990 to 1995, a physical science consultant on the Science Anytime K-5 Science Series at Harcourt and Brace in 1995, a teacher for grades 6-8 at St. Theodore’s Holy Family School in 2006, and a teacher of 11th grade physical science at St. Louis High School in 2007. He was also a developer, teacher and physical science course instructor for pre-service teachers education students from 1977 to 2001.

Mr. Rogers was honored as an Outstanding Faculty Member by McNeese State University during his tenure. He also received the Distinguished Science Award from the Louisiana Science Teachers’ Association for his exceptional efforts. He remains abreast of trends and developments in science as a member of the American Chemical Society, and as a lifetime member of the Louisiana Science Teachers’ Association, and of The National Teachers Association. 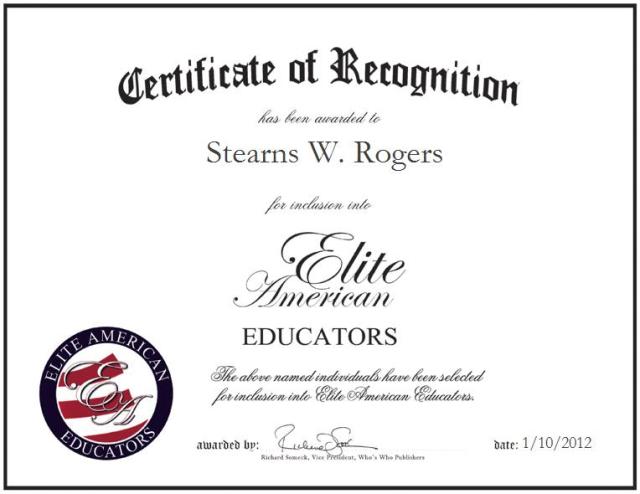